Here we would like to introduce to you our upcoming step-up summons in which demons of specific rarities are guaranteed according to steps.
4★ or 5★ demon(s) are guaranteed on each step, and you have a chance to get the new demon "5★ Tenma Asura" with every step.
And also, by performing Asura Step-up Summons to the full extent of 5 rounds (300 summons in total), you will be able to perform a 5★ Asura guaranteed summon called "Asura Summon".

*The step count and the limit of use will be reset when the part 2 starts.

Reduces damage received by 25% from skills that target all or random allies.
When the enemy uses attacks that target random enemies, this demon will become the main target.

A ten pull counts as one step, and there are six steps in total.

- You can perform the Asura guaranteed "Asura Summon" by collecting "Tome of Asura" items.

- A "Tome of Asura" item will be sent to your Gift box every time you summon a demon!

Drop rates according to rarity

Introducing summons in which Asura is available. 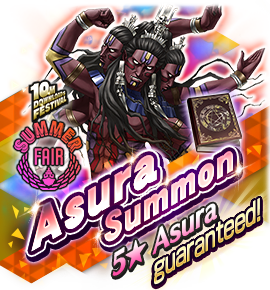 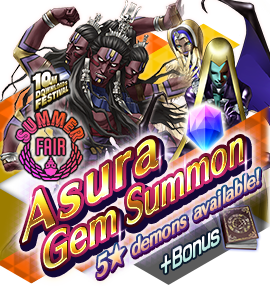 - A "Tome of Asura" item will be sent to your Gift box every time you summon a demon!

- Please note that there may be changes made without prior notice.

- Please check the info page within the game for details on available demons and drop rates.

- “Tome of Asura” items will remain in your Items list even after the event expires.

- The “Tome of Asura” item must be retrieved from your Gift Box before use.

- The amount of “Tome of Asura” items you possess can be confirmed in Items.