1st season of Tokyo Abyss to be held!

1See how deep you can advance by yourself in this dungeon!
2Obtain Souls and Essence of Sin that can be used to enhance your demons' stats!

Rewards for completing Missions can be collected at any time during the scheduled period.

* Due to functionality tests that will take place during maintenance, the actual maintenance time and period may be displayed within game as a result.

* This will be treated as a "beta" version in Ver.4.2.00.
We are planning to officially add new features and functions in the future.

When starting out, you will be able to choose your first ally, a 2★ or lower demon, from the Demonic Compendium.

Other demons can be obtained, trained and added to your party in this dungeon.

Demons obtained in this dungeon cannot be used anywhere else.

Your sword and shield will be available to you.

During battles, you may swap out your sword, but not your shield. Outside of battles, you'll be able to make changes even in the field.

During battles, the main character may swap out their sword during their own turn.

Each time you swap out your sword, half of a Press Turn Icon will be spent.

After swapping out your sword, the main character may continue their turn if any Press Turn Icons remain.

After swapping out your sword, it will be the enemy's turn if no Press Turn Icons remain.

You will automatically receive Backup Shield Bonuses for extra shields in your inventory.

This includes HP, Phys DEF and Mag DEF boosts, as well as resistance effects for each attribute and other bonuses.

Each Floor of this dungeon has a starting point and a room that houses a boss.

Each Floor also has paths that fork into two with the choice of going either left or right at each split. 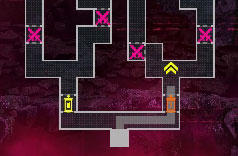 You cannot return to the path that you did not select.

Each Floor also has rooms that are partitioned off by doors.

Upon entering, an event will activate.

The types of events that appear on a particular Floor can be determined by checking the Map and seeing what may be up ahead each time you select a path.

Starts a battle with an enemy.

If the enemy is a boss, you will advance to the next Floor by defeating it.

You may choose to continue after being defeated. If you choose not to continue, you will be sent back to the starting screen for deployment.

By choosing to continue or retreat from battle, you will revert back to the point before the room was entered and return to having the same HP as before the battle.

Winning battles will raise the levels of both the main character and your party demons.

Augments: Choose an enhancement such as "St +1" to permanently grant the main character a boost to their abilities.

Stigmata: Choose from a variety of Stigmata that can provide a list of effect and permanently grant your party a boost to their abilities.

Transfer Skills to demons you own.

Press Cancel Transfer to exit the room. You will not be able to return to this room.

Talk to demons you encounter for a chance to turn them into your allies.

You will not be using items for providing offerings here, but a sacrifice (HP) may still become necessary.

Even if your HP is low, it will stop at 1 HP after offering a sacrifice, so that neither the main character nor your demons will die in the process.

If Talk succeeds and there is room in your party, your new ally will automatically be added, but will also be able to edit them into your party if there is no room.

Fuse together demons you encounter with your own to create new ones.

You can create demons through Fusion based on standard Fusion Charts.

Magnetite will not be necessary.

This Fusion process is the same as stated above, but you have a chance to Fuse and create demons not according to any Fusion Chart.

Demons created through a Conjunction will start with more EXP than that of their Fusion materials.

Demons with 0 HP can still be healed.

Press Leave to not do anything and exit the room. You will not be able to return to this room.

If it becomes too difficult to progress in this dungeon, you can Start Over and retrain your demons from the beginning.

Your current progress, as well as any enhancements made to the main character or your demons, will be lost and return to the beginning where you will once again select your first ally.

During the season, the deepest Floor you've reached will not be reset.

Clearing specific Floors of the dungeon will let you collect Essence of Sin and spend them to perform Sin Infusion, which will help enhance your demons' stats.

You can obtain a reward based on the deepest Floor you reach by the end of the season.

You can obtain Souls for the demons that are in your party at the end of the season.

Violation of our terms of service during the event may result in the suspension of your account, immediate or otherwise.